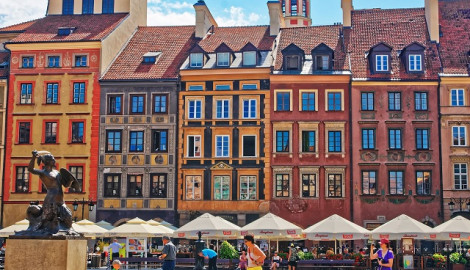 WARSAW – THE JEWEL IN THE CULTURAL CROWN OF CENTRAL EUROPE

The Polish capital Warsaw is the true cultural pearl of Central Europe, offering everything from historical architecture to contemporary museums. Prior to World War II it was known as the Paris of the East; since its restoration it has come to be called the City of the Phoenix, rising from the ashes of widespread wartime destruction. And for good reason – Warsaw has become one of Europe’s biggest metropolises, in every sense.

Warsaw Chopin Airport is an international airport located in the Włochy district of Warsaw, Poland. As Poland's largest and busiest airport, Warsaw Chopin handles just under 40% of the country's air passenger traffic. Warsaw Chopin handles approximately 300 scheduled flights daily and an ever-rising number of charters. Formerly Okecie International Airport, the airport bore the name of its Okęcie neighborhood throughout its history, until its renaming for Polish composer and former Warsaw resident Frédéric Chopin in 2001.

An underground railway station connected from the airport to Warsaw's suburban rail system was opened in June 2012, connecting conveniently to Warsaw city centre in just 30 minutes.