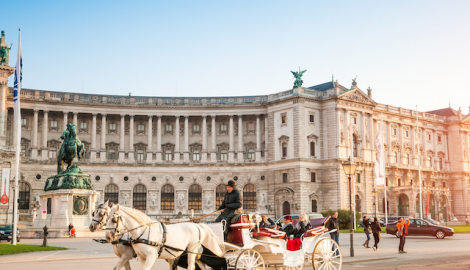 Vienna, a city of excellent museums, splendid art galleries and glorious architecture, is visited every year by millions of tourists from all over the world. Sights include the breathtaking St Stephen's Cathedral, the magnificent Schönbrunn Palace, once the residence of the Habsburgs, and the great public park the Prater.

Flowing through the city is the Danube, without which Vienna would not be Vienna. The historic centre of Vienna has been a UNESCO World Heritage Site since 2001, where the only surprise is that it was not placed on the list earlier. Lovers of art and history come into their own in the Museumsquartier (museum district), where baroque architecture rubs shoulders with more modern styles. This is the home of the Leopold Museum, which boasts a large collection of works by the expressionist painter Egon Schiele and some works by Klimt, and hosts exhibitions dedicated to the world's greatest painters.

Other museums include the Albertina, with its print collections, the Kunsthistorisches Museum (dedicated to the history of art), the Museum of Modern Art (MUMOK) and the Sigmund Freud Museum dedicated to the great psychoanalyst. Some of the greatest names of classical music are closely connected with Vienna – the Strausses, Beethoven, Mozart, Schubert and many others. Their music gives the city, with its many opera houses and concert venues, an unmistakable character.

Vilnius International Airport. The airport is located on a plateau in the south of Vilnius. It is only 7 km or 15 minutes’ drive by car from the centre of the capital.

A special train runs from Vilnius Railway Station to the airport on a regular basis. A railway stop, is located right outside the airport’s passenger terminal. A pedestrian walkway connects the airport’s terminal to the railway stop and is lit up at night.

The company TOKS offers a service to the residents and guests of Vilnius City – a drive by a minibus from the bus station to Vilnius Airport and back.

Vienna Airport is located in the town of Schwechat, 18 km south-east of Vienna. The largest airport in Austria, it follows the 'all under one roof' concept and has a single, easily accessible terminal.

Take the City Airport Train (CAT) to the centre of Vienna. Alternatively, take an S-Bahn train, bus or taxi or hire a car. The CAT takes 16 minutes to reach the city centre. By car the journey takes around half an hour.