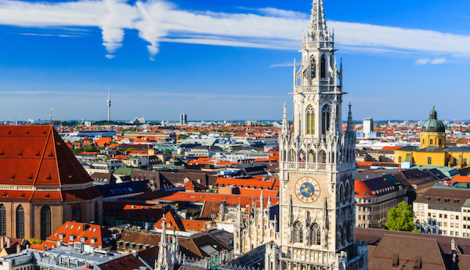 This city is a blend of medieval history and modern architecture. In early autumn it is also the setting for the Oktoberfest, a traditional event whose origins date back to 1810 and which is attended every year by around six million visitors, drawn here by the beer, the "beer maids" in traditional Bavarian costume who carry beer mugs with the skill of circus artistes, and Bavarian culture in general. Munich is the home of FC Bayern, the most successful football club in a country where football is taken extremely seriously.

It is also home to the Allianz Arena, a football stadium that is affectionately known as the Schlauchboot (rubber dinghy) because of its shape. The Olympiastadion, built for the 1972 Summer Olympics, serves as a venue for concerts by the world's biggest music stars, which draw visitors from far and wide. Munich also has the Deutsches Museum, a museum of science and technology that has no equal anywhere in the world.Many major corporations have their head offices in Munich, most notably Siemens and BMW.

15,000 people work at OSL to keep the airport running 24 hours a day. They are employed by more than 100 companies working on everything from baggage handling to air navigation.