Estonia is a gloriously flat country, and in terms of snow, recent winters have become modest, so many winter lovers have enjoyed skiing in Central Europe, with the high Alps and crowded ski resorts. In fact, it is worth looking for snow closer to home – Scandinavian ski resorts are often more peaceful and feel more like home, and are still very good as far as the quality of the tracks goes. Swedish and Norwegian resorts also proudly guarantee snow, because unlike in the warmer Central European mountains, Scandinavia has snow from late November to late April.

And here you have the possibility to see the colourful northern lights, or munch on warm cinnamon rolls at the top of the mountain, and these are just a couple of reasons why you should choose Scandinavian ski resorts for your next ski trip!

Resorts surrounded by northern nature provide activities even for those who are not big alpine skiing fans. Each larger ski centre is surrounded by several hundred kilometres of cross country trails, that run across picturesque mountain slopes, and offer amazing views. There are other options for an active vacation – many resorts offer limousine rides, cross-country skiing, and for adrenaline junkies there's heli-skiing, or in other words, a descent starting from a helicopter. It is also worth noting that most of the resorts allow children under the age of six to go on the slopes free of charge, the only condition being that their small helmets should be firmly on.

Unlike many others that are carefully hidden and popular only among the locals, Åre has gained fame everywhere. This Northern Swedish resort has been selected as Europe's best ski resort several times, and has hosted the World Alpine Skiing Championship and World Cup events.

The Åre resort combines three big villages and skiing centres – the largest of them is Åre, with versatile slopes suitable for almost everyone. Less than 10 km from Åre, is Duved, which offers slopes for every level. The Åre Björnen ski centre is mainly for children and beginners, and younger family members can here experience their first ski runs away from more advanced skiers.

Although Åre has created particularly attractive holiday opportunities for families with children, the resort also has a decent nightlife. Åre is one of the few resorts in Scandinavia, where aprés-ski possibilities are considered to match the glamorous atmosphere of the Alps.

Åre is conveniently located less than 150 km from Trondheim Airport in Norway and a shuttle bus runs between the airport and the ski centre. Tickets can be booked at www.flygtaxi.se.

The ski season runs from November to 1st May (if there is enough snow). The high seasons in Åre are from 20th December to 5th January, from 8th February to 9th March, and from 24th March to 6th April. During high season the ticket price is usually a bit higher. Among other things, Åre offers  guaranteed snow, which means that there should be enough snow from 17th December to have at least 10 slopes open. If there is not enough snow, customers have the right to a full refund. 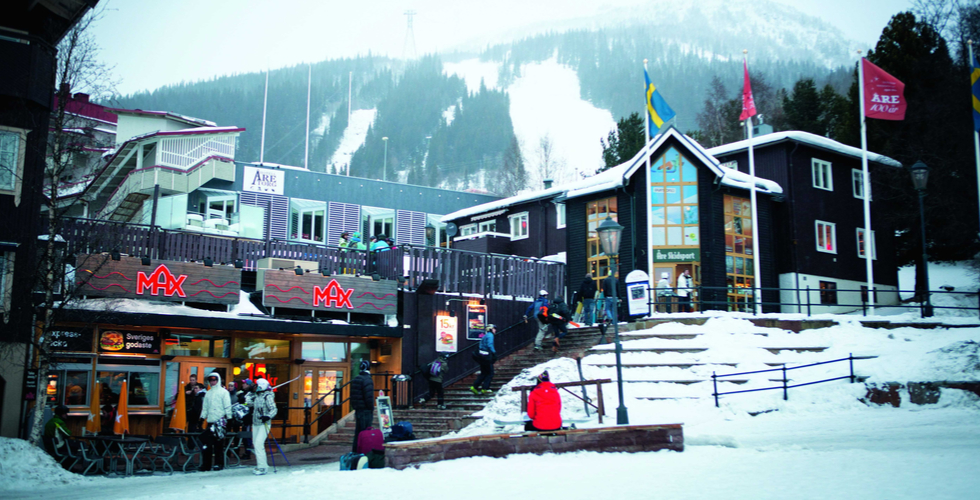 With plenty of opportunities for intermediate-level, calm skiers, several children's runs on every hill, comfortable ski-lifts and easy green and blue runs, Sälen is a popular ski resort in Sweden with a family-friendly atmosphere.

In addition to skiing, there are plenty of additional activities for families in Sälen. For example, the mountain pass can be connected to the Experium Water Centre, and you can finish a long day on the slopes with fun on the water slides or a soak in the warm jacuzzi. Children will love the Hundfjälle's Trolls Village (Trollskogen) – on this exciting hiking track, children will meet more than 700 exciting talking wood figures. It is best to visit the troll village in the evening, when thousands of coloured lights illuminate the forest, making the entire hike even more mysterious.

Fly  into Stockholm Airport and get to Sälen from there. The most convenient way is to take a rental car from the airport and drive to the resort, especially if there are smaller children in travelling in the group.

The Sälen ski season starts at the beginning of December and runs until the end of April. Sälen is in the same chain as the Åre ski resort, so the high season, with its more expensive ticket prices, is at the same time as in Åre. There is also guaranteed snow in Sälen – if by 17th December at least 12 slopes are not open, customers have the right to a full refund.

The three-day pass prices for one weekend start at 108€ for young people, and 85€ for the elderly. Week-long passes start at 177€ and 142€ respectively. 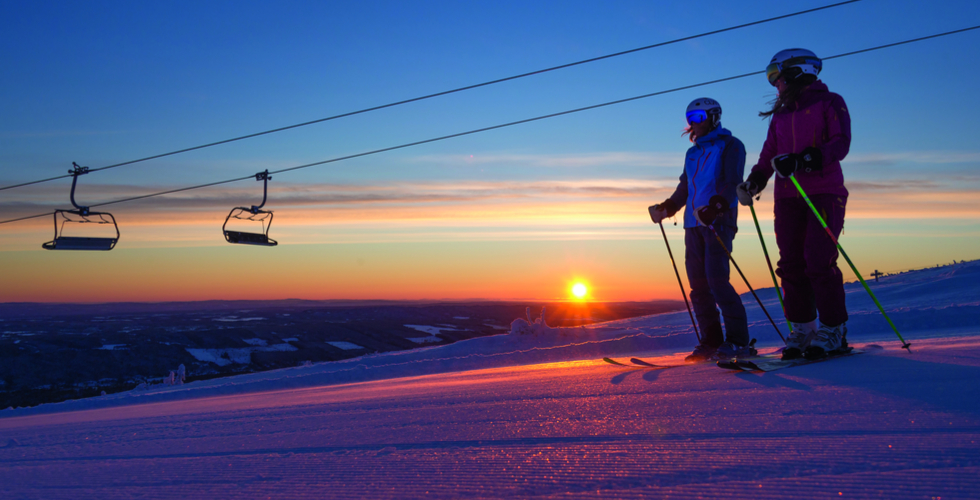 Geilo was established thanks the railway line connecting Oslo and Bergen. As it is located next to the railway, arriving by train directly from the airport is convenient, and you can enjoy the beautiful views of Norway's untouched nature during the three-and-a-half-hour ride. The resort centre, a historic small town with 2 300 inhabitants, is located on the border of two national parks, making the entire atmosphere very calm and idyllic.

However, Geilo is more than just a ski resort, and combines all the opportunities for a decent winter vacation. Mountaintop slopes are good for beginners and enthusiasts, as well as over 200 km of cross-country tracks. For children, it's great to visit the Langedrag Nature Park and get acquainted with the reindeer, polar bears, wolves and other Norwegian animals.

There is also something for adrenaline junkies, namely that Geilo is among the best resorts in the world for snowkiting – in other words, skiing/snowboarding while being towed behind a kite.

The Oslo–Bergen train runs through Geilo, which is the most comfortable option for reaching the town. Also, a shuttle bus runs from Oslo Airport to the resort. Geilo has 39 different slopes, and you can choose the blue and green runs, which are suitable for children, or the black runs if you're a more extreme skier. In total, Geilo has 35 km of various descents, with 22 ski-lifts. The ski season usually runs from mid-November to late April, but the first parks are open for training from the end of September. 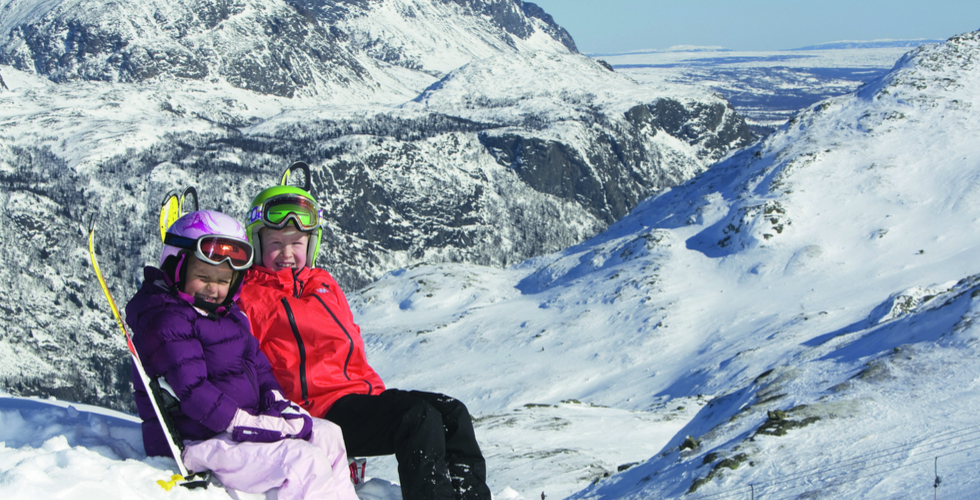 Oppdal is a small town near Trondheim with a population of 6000. Oppdal's powerful slopes attract mainly courageous alpine skiers and snowboarders, as well as passionate cross-country skiing enthusiasts. The four mountains around Oppdal are characterised by long and steep slopes, which make this an especially attractive place for off-piste enthusiasts. The snow is sustained powder-like by the harsh northern climate, and film-like extreme descents become a reality in Oppdal.

Oppdal has 46 different slopes, with a total length of 56 km. Most of them are easy blue runs, but Oppdal's main attractions are the black runs and unserviced slopes. There are, in total, 18 ski-lifts. The heights of the slopes in Oppdal are between 585 m and 1 300 m above sea level.

An adult day pass costs around 44€, a student and elderly day pass 36€, and a week pass costs 197€ and 154€ respectively. As Oppdal is not very popular among the locals, you can be quite sure that it is always relatively peaceful. The season will open on 18th November this year, and usually runs until the end of April.