WHEN CHOOSING A TRAVEL DESTINATION where you can get acquainted with ancient history, the small cities of Greece or multicultural Istanbul tend to be the first ones that come to mind. However, the rich cultural history of the Balkan Peninsula can also be seen in the Macedonian city of Ohrid, on the shores of Lake Ohrid, which, next to the wellknown tourist centres, is still relatively calm and undiscovered and is ideal for a longer cultural trip or simply a sunny holiday. 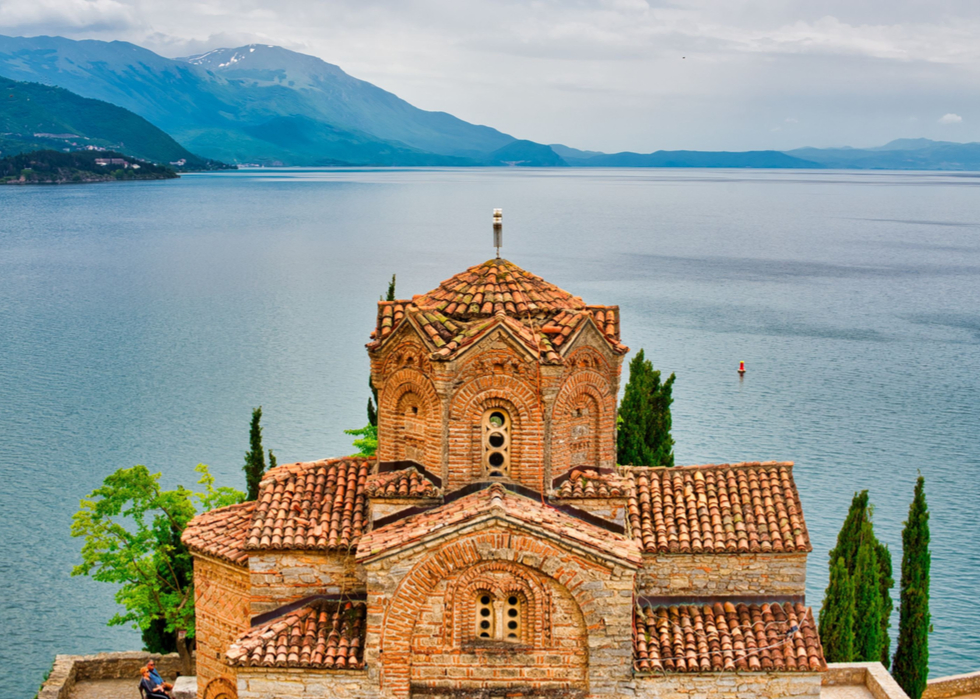 The first communities settled in the Ohrid area probably already around 6000 BC, but the first reports of the town on the shores of Lake Ohrid are from the year 500 BC – back then the city was called Lychnidos. During the 9th century, the Bulgarians conquered the city and began using Ohrid's modern name. At some point Ohrid was even the capital of Bulgaria. In 1018, the highland that Ohrid sits on was part of the Byzantine Empire, and later it was ruled by Serbs, Bulgarians, Albanians and Turks.

Different foreign rulers have contributed greatly to the sacral architecture of the city. Namely, there are 365 churches of all sizes in Ohrid; it seems that there is one church for every day of the year, and maybe this is why Ohrid's nickname is the European Jerusalem. Ohrid's churches are good examples of early Christian and Byzantine art, from church architecture in general to mosaics and wall murals. One of the most beautiful churches is St. John's Church in Kaneo, on the rocky side of the Old Town. This small Orthodox church probably originates from the 13th century, and the church's seailing is decorated with an impressive fresco of Christ.

Lake Ohrid is invitingly warm, creating an idyllic resort atmosphere in the town.

Walking from the centre of the old town to St. John's Church takes some time, but the breathtaking view of the lake and the surrounding mountains is definitely worth it. The sight of the church in the morning mist or in the evening sun, with Lake Ohrid in the background, is probably the most popular among tourists. Those who want to spend less time on foot can use one of the many boat taxis to reach the church. It is impossible not to find a taxi, because tourists are constantly being attracted by the drivers call: "Only five euros!"

Ohrid Castle, which stands proudly above the city, is on the way to the church. The castle was built in the 10th century when Ohrid was the capital of the Bulgarian Empire under the rule of Tsar Samuil. The ticket, which costs only a few euros, gives you access to the medieval castle walls, from which you can see the beautiful views of the lake, the surrounding mountains and the old town.

One of Ohrid's points of pride is also the Christian Basilica of St. Kliment. The Byzantine style church dates back to the 9th century, when the St. Kliment taught there. Also, the Church of St. Sophia from the 11th century, which was a long-standing centre of the bishopric, is hidden among the streets of the old town. You can see the 11th–13th century frescoes, which are considered to be some of the greatest achievements in Byzantine art, in the church interior.

The historic old town on the shore of the lake, resembles colourful Italian tourist towns: the houses rise along the cliffs, with the cobbled streets between them. Even most restaurants offer delicious Mediterranean cuisine. However, you should definitely step into the local bakeries and try traditional burek – layered filo pies filled with cheese, spinach, minced meat or ham. A typical Macedonian breakfast includes gourmet pastries with goat cheese. Macedonian coffee however, is dark and strong.

A long promenade runs along the shores of Lake Ohrid, and the magnificent Macedonian flag with several adjacent sculptures mark the beginning point of it. Massive sculptures and monuments are quite a Macedonian thing. For example, in the centre of the capital Skopje, almost every step of the way there will be at least five monuments in view; this is one way the Macedonians like to decorate their city and express their national pride. Counting these figures may even become a kind of entertainment during a trip!

SIMPLY CAPTIVATING: WARM, CHEAP AND AT THE HEART OF EVERYTHING

Ohrid is at least as beautiful as the picturesque resort towns of Italy or Southern France, but significantly less expensive. A three-course dinner in a restaurant – for example, cheese selection for two, main dishes, wines and coffee – usually costs less than fifteen euros per person. Staying in a hotel is also wallet-friendly. A night in a threestar hotel costs around 25 euros per person, and if you decide to share an Airbnb apartment with friends or family, the price per night per person can be as low as 10 euros. Apartments at this price can also be found in the charming houses of the old town.

Macedonia is a suitable for escape from the northern cold during any season. The average temperature in summer is 27 degrees, and during early spring, the sun is still high in the sky and the temperatures are around 21 degrees. Lake Ohrid is warmly inviting in the high season – in the summer, the water temperature is around 23 degrees.

When travelling in Macedonia, it is worth thinking about renting a car, because it is significantly more affordable than anywhere else in Europe. Renting a smaller car for three days costs around 150 euros, but gives you the opportunity to drive to the capital Skopje, or to neighbouring countries Greece and Albania. The Albanian city of Pogradec is on the west coast of Lake Ohrid, but if you drive along the western coast of Albania, along the Ionian Sea, you will find the Albanian Riviera. About 300 kilometres from Ohrid, you can find Thessaloniki, the second largest city in Greece. Why not go and explore nearby Lake Prespa, or the Macedonian wine region in the Vardar River Valley in the centre of the country and try the local Temjanika or Vranac grape varieties!

Just as Ohrid was once an important crossroad of trade routes, it is now important as a good tourist destination, and an ideal starting point for a smaller tour of the Balkan Peninsula. Merchants have been replaced by holidaymakers, but the buzz of this beautiful medieval city is still pleasantly inviting.