One of the reasons St. Petersburg is such a popular destination for Russians and Europeans alike is that it is different. It stands apart from all other Russian cities, but is it also very different from what you can see in Europe. Why is that?

It is probably because of the unique story of its inception. It was built from scratch in the most inconvenient location (basically a bog) on a stretch of land freshly acquired by Russia as a trophy in a war with Sweden. Nevertheless, it was designed as a capital from the very beginning.

Tsar Peter I (also known as Peter the Great) is one of the most controversial figures in Russian history and definitely the most prominent reformer in this country. He had a vision of a new Russia – an empire tailored to modern European standards in everything, from fashion and hair styles to army structure and mode of governance. Under Peter I changes were drastic. One of them was moving the capital from Moscow, a stronghold of old Russian traditions, to St. Petersburg.

The new city was a blend of Peter’s impressions of European cities like Amsterdam, London and Vienna but adjusted for Russian scale and imperial symbolism. The city was meticulously planned jointly by European and Russian architects. One of St. Petersburg's major features is an integrity that cannot be seen in any city that evolved naturally over centuries with little to no centralized planning in the initial stages. All of this created a unique image and ambience – never completely European, but not exactly Russian either.

Sights not to be missed while in St. Petersburg

The city started right here, by raising a fortress to gain control over the Neva river. Later on it became a place of detention for generations of revolutionaries and freethinkers. Here, in the birthplace of Peter’s empire, they created many of their ideas and books that would change the country once again in the XX century.

Arguably the most prominent landmark of St. Petersburg. Generously decorated with countless statues, frescos and gold ornaments, it could trap you for hours and days should you wish to study everything really closely. Be sure to climb up the stairs and enjoy one of the best views over the city from the open galleria at the foot of the dome. Currently the cathedral is a museum and deserves an extensive excursion. Recently the local authorities decided to return the cathedral to the Russian Orthodox Church. This probably means that the museum will have to move. According to Russian media, day X might come in July, so hurry up and visit it.

This is probably the closest competitor to St.Isaac’s, based on St. Peter’s Basilica in the city of Vatican. Two of the four wings were never completed, but nevertheless the building is enormously huge and beautiful. It was constructed on the order of Paul I, one of the most ill-fated and strange rulers of Russia. He was Grand Master of the Order of Malta, had a keen interest in masonic heritage and was murdered in a coup at the age of 46. Get a competent guide and you will be surprised to see that this orthodox cathedral is actually full of masonic riddles with deep symbolism. 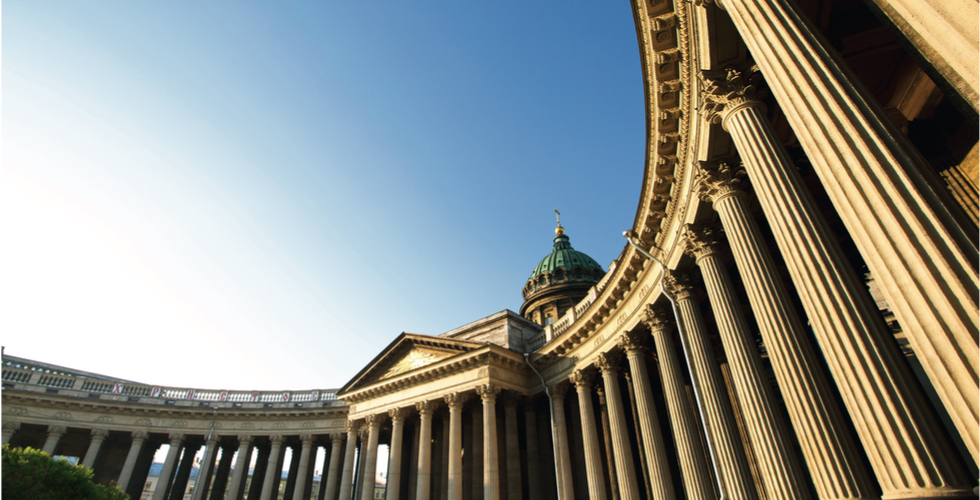 This place deserves at least a full day of your time, especially if you are interested in fine arts. Once a winter residence for the Russian emperors, it is now a classical art museum with one of the richest collections in the world. Still, even if you are not an ‘arty type’, have a look at the fabulous luxury of the Russian court. Strong impressions guaranteed.

There are 342 bridges in St. Petersburg. Of these, 22 deserve special attention; they are drawbridges, another typical landmark of the city. During navigation season they open at night to let the ships pass through the city up and down the Neva river. Watching the bridges opening is a must. You can choose any of them, or take a car trip to see all of them open one by one. Some excursions offer a visit inside the bridge to see the drawing machinery at work. Please keep the drawing schedule at hand if you stay out late, so that you won’t have to wait until early morning to get home – when the bridges are open, some parts of the city become completely isolated.